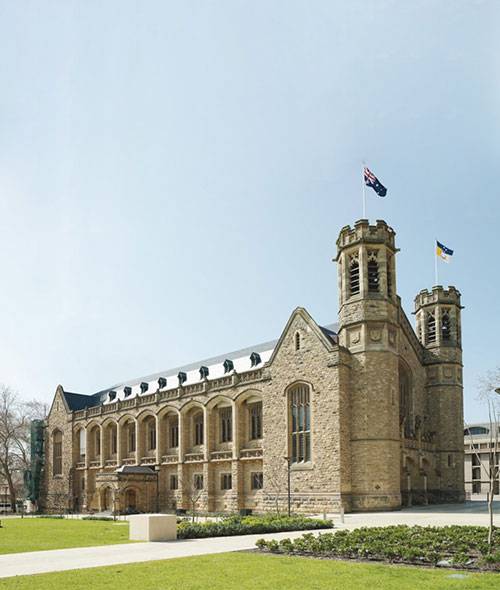 The University of Adelaide is a world-class research and higher education institution situated in the heart of one of the world’s top 10 most liveable cities. Founded in 1874, we’re Australia’s third oldest university and consistently rank among the world’s elite, in the top one per cent globally and number one in South Australia. Our reputation for excellence and breaking new ground has been forged by a continuous stream of exceptional people.

We proudly count among our distinguished alumni: five Nobel Laureates; more than 120 Fulbright Scholars; and over 100 Rhodes Scholars, including two female Indigenous Australian recipients. Australia’s first female prime minister and Supreme Court judge were also University of Adelaide graduates. The University of Adelaide is consistently ranked in the top 1% of the world’s universities. It is known for high impact research that contributes to world challenges and delivers economic and social benefit.

The high quality of the University’s research is recognized in the latest round of Excellence in Research Australia (ERA) results conducted by the Australian Research Council (ARC). The University has four campuses. Three in South Australia at North Terrace, Waite and Roseworthy and one in Melbourne, Victoria. It also offers undergraduate and postgraduate programs in Singapore through the Ngee Ann-Adelaide Education Center and have a number of research facilities at Thebarton.

your annual rent (Off-campus) in Adelaide

Transportation: A range of parking and transport options are available to staff and students such as bike parking, car parking and inter-campus shuttle bus (between Roseworthy, North Terrace and Waite) and the fare is $2.00 each way.

On campus accommodation: University of Adelaide provides residential units which include: The University of Adelaide Village (the Village is the largest of the University-managed student accommodation options), Mattanya Student Residences (a fifteen minute walk to North Terrace campus and five minutes from the trendy Melbourne Street café and restaurant precinct, Mattanya offers comfortable, convenient and independent living in a quiet suburban location.) and Roseworthy Residential College (Roseworthy Residential college accommodation is only available to students of the University’s rural campus, which is located 50 km north of the city campus and offers students the benefits of on-campus residential living.).