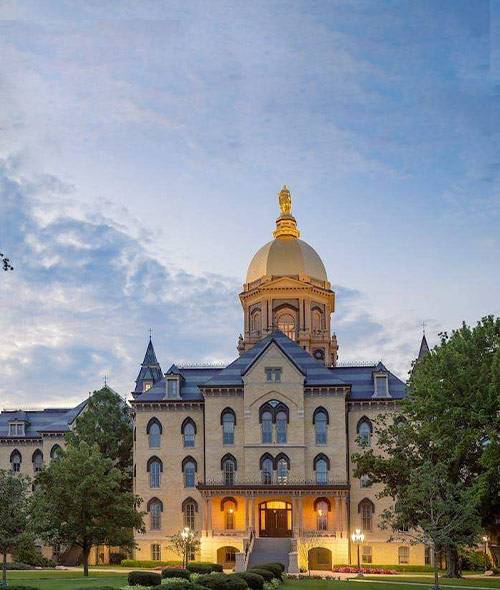 Notre Dame is a private Catholic University, extending from the West Coast of Australia in Fremantle, to the North-West town of Broome and across the continent to the heart of Sydney. It embraces the ancient and esteemed traditions of Catholic Universities in Europe, North America and 2000 years of the Catholic Intellectual Tradition. It welcomes people of all faiths or none at all. As an academic community, it welcomes open and rigorous enquirer, debate and discussion.

Notre Dame is a modern Catholic University, operating in a world in which the vast speed of change is felt in nearly all aspects of its daily lives. Notre Dame brings to bear its traditions and its values to engage in scholarship and research, to address the developments and challenges of the modern world, to serve the common good and to assist all its students to achieve the academic excellence that it promote and expect.

The Objects of the University are: The provision of university education, within a context of Catholic faith and values; and the provision of an excellent standard of -teaching, scholarship and research;training for the professions; and pastoral care for its students. The University of Notre Dame Australia has 3 campuses: Fremantle campus (opened 1992 with 50 postgraduate Education students), Broome campus (opened 1994 on the site of the former Nulungu Girls College. Has a special focus on training for careers in rural health and education) & Sydney campus.

annual rent in Fremantle based on univly research

Notre Dame’s Sydney Campus includes two separate sites, both in the vibrant social hub of the city: Broadway site is located at the heart of Sydney’s university district, a short walk from Central train station, close to the inner-city precincts of Newtown, Camperdown and Surry Hills and also near the city’s lively Chinatown district. It is home to most of Academic Schools including Arts & Sciences, Business, Education and Law.

The Darlinghurst site is nestled in Sydney’s famous shopping district – showcasing the world’s leading fashion brands and cafés that set the benchmark for Australia’s legendary café culture. It is strategically located near St Vincent’s Hospital which is recognised worldwide for the role it plays at the cutting edge of medical science. The hospital is a key partner of Notre Dame’s Schools of Medicine and Nursing. Fremantle campus is compact and easy to negotiate on foot or by bicycle. Free Blue and Red CAT buses link landmarks such as the Fremantle Arts Centre, Maritime Museum and Fishing Boat Harbour. Buses and trains operate from Fremantle to Perth, Rockingham and Mandurah. There is a regular ferry service from Victoria Quay to Rottnest Island. The crossing takes around 25 minutes. Notre Dame offers support for all international students including: Mentor program,academic support,student counselling, social networks, student administration, access and inclusion advisor, non-denominational prayer room.